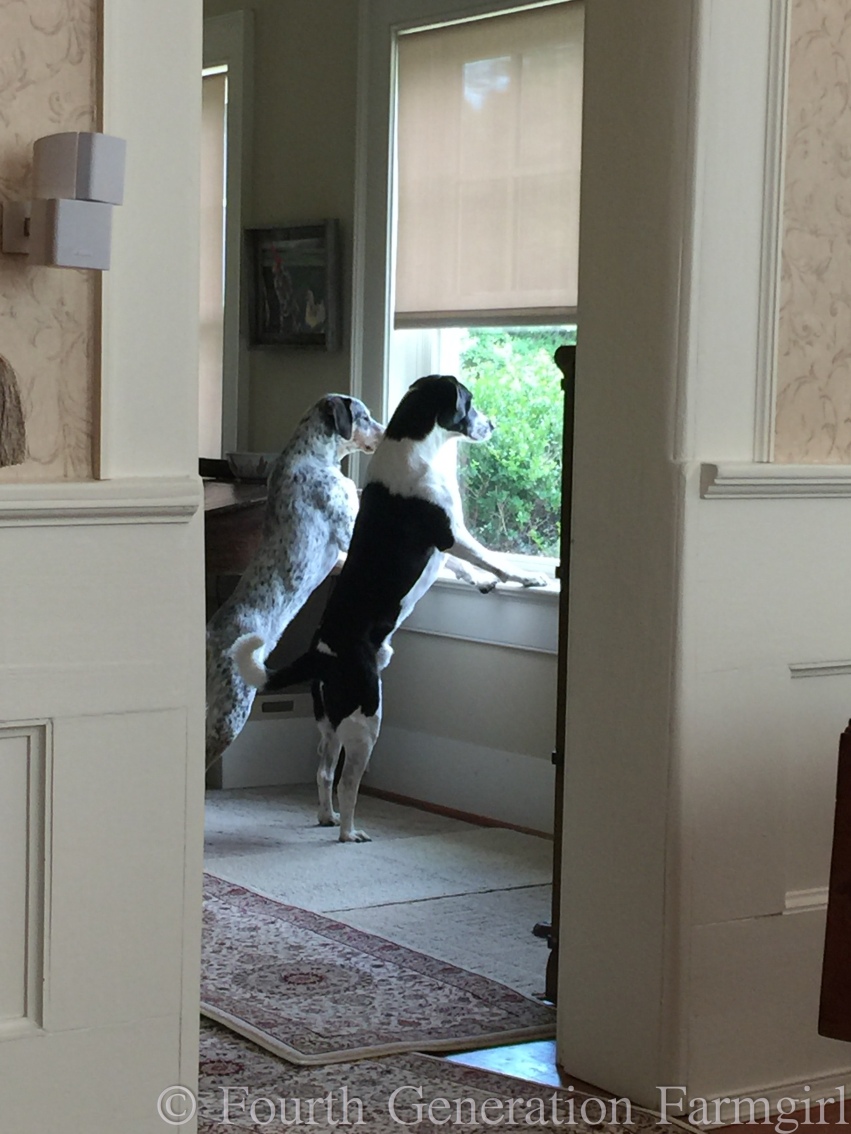 There is no shortage of rabbits on Green Hill Farm this summer.  I’m not kidding!  We are Plum. Covered. Up.  There are big rabbits, little rabbits, and even teeny-tiny rabbits. They’re everywhere:  running across the driveway, darting into bushes, chasing each other around the vegetable garden, sunning themselves on the lawn, hanging out in the sheep pasture, munching on clover in the back garden, and sitting under the window in the dogs’ play room—tormenting poor Bizou.  We simply have too many rabbits!

Don’t get me wrong.  I love all critters, especially cute, furry bunnies.  But, lately, they’ve been making our lives somewhat stressful.  These wascaly wabbits are driving Bizou and Dash to distraction, and me right along with them.  Bizou is completely obsessed.  Once in a while, I’ll hear a groan and a moan and then a whimper.  This melodic trio quickly escalates into many high-pitched whimpers, followed by lots of frantic whining and running around the room.  And, of course, jumping up on window sills—all in a vain attempt to glimpse rabbits.  Understandably, this behavior isn’t good for Bizou, the window sills, or my nerves for that matter.  So, whenever the rabbits decide to hang out under the windows, I usually encourage Bizou to leave the room, and I shut the door.  The other day, Bizou was so wound-up, running in circles and launching himself at the window to get the rabbit that no amount of verbal or physical cues could convince him to leave.  After trying to get him out of the room a number of times to no avail and becoming a little distressed in the process, I was almost ready to give up when Dash came to the rescue.  Apparently, his Border Collie herding instincts kicked in, because next thing I knew, he was taking control of the Bizou situation. With an intense look of concern on his face, Dash ran across the floor, gently grabbed Bizou’s leg in his mouth, and began pulling him out of the room.  I was momentarily shocked, but once I realized Dash wasn’t hurting Bizou and was actually trying to help, I hurriedly encouraged them both through the doorway and closed the door.  With team effort, Dash and I were finally able to remove Bizou from the window and the view of the rabbit plus restore a bit of peace to the household.

Here’s the thing:  We have lots of rabbits.  So many, in fact, that Bizou never has to worry about not seeing another rabbit again. Just yesterday, he was intensely watching one of these cute critters at a distance before finally realizing there was one right under his nose taking a bath.  Happy hunting, Bizou! 🙂

Have a great weekend!