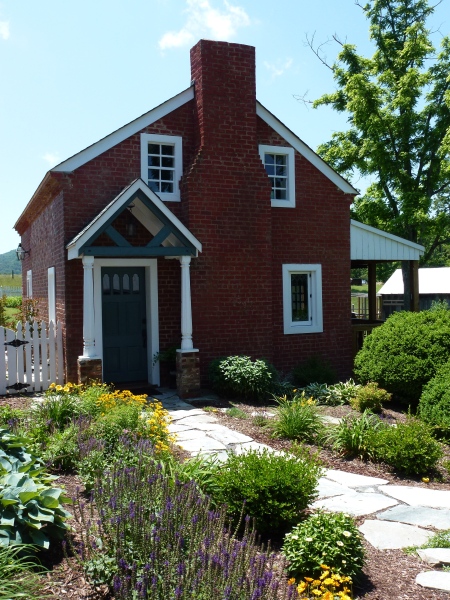 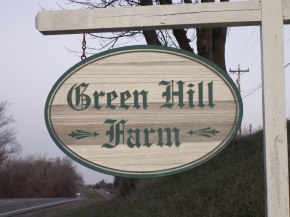 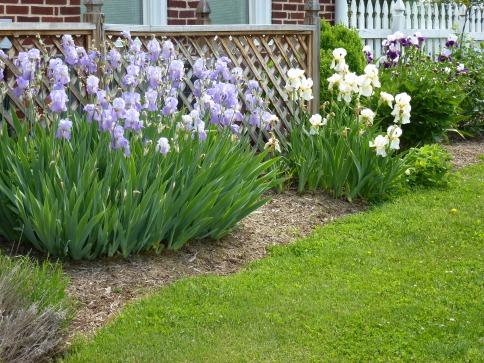 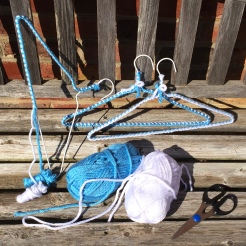 As a child growing up on Green Hill Farm there were two things that I looked forward to the most: visiting with Grandma and Granddaddy Rieley and summer time.  One thing that I liked best was neither required dressy outfits or shoes.  I also relished the freedom of an undetermined day, one without rules or routines.  I’d run around on the farm sometimes barefoot and still in my pajamas, or a mismatched outfit chosen by me; one which usually included an article of clothing made of terry-cloth, a Mork and Mindy tee-shirt and maybe even knee socks.  I probably resembled something akin to a cross between Little Orphan Annie and a peasant.  Nevertheless, I didn’t care.  I had Grandma to visit, stuff to get into, and I was comfortable–a formula that equalled happiness in my world.  Of course, those days are long gone, because I’d never go outside today without at least a pair of flip flops on my feet.  I also don’t wear terry cloth shorts or knee-socks anymore, either–at least, not together.  However, I still prefer jeans and tee-shirts to dressy outfits, and I’m known to wear my pajamas outside the house on occasion (but never off the farm).  As for those undetermined days, well, I still love them, because you just never know who you may meet or what you might learn.

It was a glorious summer day like the ones depicted in those old Country Time Lemonade commercials:  the sky was the most beautiful shade of blue, the grass in the meadow was swaying in the breeze, and the sun was radiating a special kind of warmth that you feel both physically and emotionally.  I was skipping along on my routine walk to Grandma’s, when I discovered everyone sitting on metal lawn chairs, visiting in the front garden of the house:  Grandma and Grandaddy, Mom and Dad and Mr. and Mrs. Claude Camellia.  They all sat chit-chatting as the smell of irises, Grandma’s favorite flower, floated over the conversation.  The Camellia’s were from Durham, North Carolina and guests of my grandparents.  Grandma and Grandaddy had met them the previous winter while vacationing in Florida and avoiding the Virginia snow.  I’m not sure what Mr. Camellia’s occupation had been, but Ethel (she told me that I could call her that) was a retired Latin teacher.

As I approached the group, I noticed that Ethel was busily working on something:  holding two, small balls of blue and white yarn, her hands moved briskly from side to side as the colored yarn stretched around a wire coat hanger positioned between her knees.  While everyone talked, I puttered around picking flowers and playing with whatever dog or random barn cat that crossed my path, happily in my own, unstructured world. That is until Ethel called me over to her.  “Would you like to learn how to cover a coat hanger with yarn?” she sweetly asked.  My 8-year-old brain, while strenuously against the idea, was trying hard to come up with a realistic alternative to outright fleeing.  I stood there, fidgeting.  I probably wore an expression that said:  I’d rather do almost anything else on Earth than sit here putting yarn on a coat hanger.  However, when I was about to make an excuse, I felt Dad’s gaze upon me.  I begrudgingly glanced in his direction, and after reading his face, I knew what my answer would be:  “Yes, Ma’am.  That would be nice.  Thank you,” I said.

I felt miserable.  A perfectly good day of puttering–ruined!  “Here, you can have my seat.  I believe it’s time to start fixin’ dinner,” Grandma said.  It was only about 11 o’clock in the morning, but on Green Hill Farm, the meal served at noon was called dinner.  This is probably because farmers rose early; by 12 o’clock, not only had they worked at least eight hours, but they were hungry–dinner was the main meal of the day.  As Grandma got up to go inside, my eyes longingly followed after her until she disappeared into the darkness of the house.  The happiness and lightness that filled me only minutes earlier were gone, and my ill-fated situation was beginning to sink in…for the next hour, I would have to sit still with someone I barely knew, so that I could learn about something for which I had absolutely NO interest.  With slumped shoulders and dull eyes, I walked toward this smiling, gray-haired stranger, who was dressed in a crisp, cotton blouse covered with little, lavender flowers and reluctantly sat down in Grandma’s seat.

As I sat down, Ethel pulled my chair close to hers and proceeded to explain to me how to measure a yard of yarn. She told me to hold one end of it to my nose and then stretch it out as far as I could.  I did that about four or five times, cut the yarn and rolled it into a ball.  When I finished, I repeated the process.  Next, I tied the two ends of yarn together while holding the coat hanger, hook side, away from me.  Then, I tied a knot at the top of the hanger, right under the hook.  I began to tie a knot with each ball of yarn, alternating sides.  As I  worked on my coat hanger, Ethel continued with her own.  At first, I was awkward and slow, and my knots were fat, loose and twisted.  Ethel periodically paused to instruct me in the art of covering coat hangers, stopping me to demonstrate proper technique.  As I worked around the coat hanger with the unraveling balls of yarn in my little hands, I became more adept.  The knots were becoming tighter and more uniform.  I sat there, bent over my work, tying yarn knots for the better part of an hour, until Grandma called us to eat.  By the time our plates were ready, I had completed my yarn coat hanger.  The first half of it was covered in loosely, knotted, blue and white yarn; whereas, the second half was more dexterously rendered.  Anyway, I was very proud of my accomplishment, and I was beginning to like my new friend.

The coat hanger lesson wasn’t terrible after all, and it had actually turned out to be fun!  I enjoyed it so much that I must have made about 30 yarn hangers over the summer, because I remember giving them to everyone as Christmas presents that year.  Throughout my childhood, the coat hangers were also a fun means to earn a few extra dollars.  Family and friends would bring me their old, wire hangers to cover with yarn, and for a $1.00, they would receive a handmade gift with which to delight someone.  Even today, I continue to make yarn coat hangers as my contribution to a fundraising craft table for my P.E.O. chapter–a philanthropic organization for women.

Looking back, I realize that meeting and spending time with Ethel was a gift.  She taught me a number of things during her short visit that summer: one was how to cover a coat hanger with yarn, and the other was to say I love you in Latin–Ego amo te.  But the most important thing that I learned from her wasn’t about coat hanger crafting or Latin phrases.  The most important thing that I learned was to step outside of myself and my routine in order to be open to new people and experiences–people and experiences that would enrich my life.  Over that short week, I grew fond of Ethel.  I appreciated her kindness and attention as well as all the new things I was learning.  Ethel and I were pen pals for a while, but unfortunately, I never had an opportunity to visit with her again.  I often think of her affectionately, remembering her patience with an 8-year-old, little girl who just wanted to run around that day.

Here’s the thing:  All these years later, whenever I sit down to cover a coat hanger with yarn, I warmly recollect that day.  I see an 8-year-old me, playing at Grandma’s, enjoying a beautiful summer morning.  I remember those metal lawn chairs, the smell of irises blooming and learning to make yarn coat hangers with a new friend– a humble moment in time that I will forever carry with me.